The Yeti, or "Abominable Snowman", is a mythical creature said to live in the Himalayas of Central Asia. It is a relative of the North American Bigfoot. It has appeared in a little bit of Disney media. 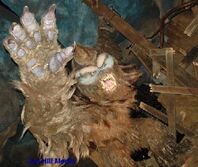 Yeti's appearance during Winter Vacation from Phineas and Ferb Christmas Vacation!
Add a photo to this gallery
Retrieved from "https://disney.fandom.com/wiki/Yeti?oldid=547396"
Community content is available under CC-BY-SA unless otherwise noted.