“Abominable! Can you believe that? Do I look abominable to you? Why can't they call me the Adorable Snowman or... or the Agreeable Snowman, for crying out loud? I'm a nice guy.”
―The Yeti describing himself to Sulley and Mike

The Yeti (a.k.a. the Abominable Snowman, Adorable Snowman, or just Adorable) is a character in Disney/Pixar's 2001 animated film, Monsters, Inc.

The Yeti is a monster who worked at Monsters, Inc. until he got banished to the Himalayas by Waternoose for discovering letters regarding the latter's involvement with the Scream Extractor. Despite being banished, he likes living in the human world.

“Welcome to the Himalayas!”
―The Yeti greeting a banished Mike and Sulley[src]

The Yeti is first mentioned by Mike along with Loch Ness and Bigfoot as the three monsters to all have one thing in common: banishment. When Mike and Sulley get banished to the wasteland in the Himalayas, they fight each other until the shadow of a huge and seemingly menacing figure appears. It shortly turns out to be the Yeti, who greets them and makes them feel comfortable in his cave while offering yellow snow cones (which he claims to be lemon-flavored while Mike thought it were made from urine). The Yeti also shows himself to be a comedian, such as when he mentions about his friend Bigfoot, who has called himself "King Itchy" to cheer up Sulley, who still feels guilty about scaring Boo, the human girl that he has accidentally brought into the Monster World, during the scare simulator demonstration. When he mentions something about a local village, Sulley, still wanting to help Boo, suddenly demands the Yeti to tell if there are any kids in that village (which he did, saying that there are all kinds of kids there and that it takes a 3-day trip down the mountain to get to the village) so that he will be able to sneak back into the Monster World. However, the Yeti warns Sulley against going out in a blizzard, but Sulley does so anyway, saying that they need to get to Boo. When he gets hit by a snow cone, the Yeti points out that Mike threw it, who throws the rest at him while berating him of what he did and how it will affect his record, though he drops the last one when Sulley tells him that the last part doesn't matter anymore. Wanting to exit the heated argument and noticing that they were out of snow cones, the Yeti steps out to "make some more".

The Yeti is last seen carrying more snow cones (apparently what he said wasn't just an excuse) when Sulley slides past him on a sled. He calls out to Sulley that he has made more snow cones, but Sulley's already long gone and makes it back to Monstropolis to save Boo. Mike eventually takes two of his snow cones and follows Sulley to Randall’s lab where he throws one at Sulley then the other one at him (which unintentionally hits Randall instead, making him visible so Sulley could punch him to stop him from choking him to death).

The Yeti appears at the end of the prequel Monsters University as a Monsters, Inc. employee who introduces Mike and Sulley (then new arrivals) to their jobs as mail sorters. He tells them not to mess with the mail or peek into them, as such acts are punishable by banishment, implying this is the reason why he is later banished.

“Abominable? Why can't they call me the "Adorable Snowman"? And why "snowman", huh? I'm not made of snow. I'm not even a man.”
―Yeti to Tylor Tuskmon.

He makes his first appearance in the episode "Adorable Returns", where Tylor mistakenly enters the door to the Himalayas, and is rescued by him in the snow. When Val finds Tylor and they both leave the Himalayas, he follows them through the door and returns to Monsters, Inc., being glad to be there again, and visiting the corners of the factory. While he is there, it is revealed rumors have spread as to why he was banished ranging from eating his co-worker Dale (who in actuality quit his job to become a massage therapist), stealing 27.5 cars in the parking lot, or drinking scream from a canister. Being a banished monster, Tylor tries to get him back to the door since harboring banished monsters will result in the banishment of those that harbor the monster too. After getting him to return to the Himalayas, by suggesting he bring Mike and Sulley snow cones, Val tells Tylor that she has discovered from Roze that he was banished due to him seeing a letter about Waternoose and his plans for the machine that extracts the screams of children. Tylor decides to go back for Adorable (now called by others), and gets him readmitted to Monsters, Inc., where he begins working as a snow cone seller.

In "Little Monsters", he appears distributing ice cream cones among the children who visit the factory.

The Yeti made a cameo appearance in Cars as a snowplow during the end credits, as part of a meta-joke about John Ratzenberger appearing in every Pixar movie as pointed out by Mack (who is also voiced by Ratzenberger).

"Welcome to the Himalayas!"

"Never go out in a blizzard!"

The Yeti working with Mike and Sulley in the mailroom.

The Yeti as a snowplow in Cars

The Yeti with Tylor Tuskmon

Sulley unbanishes the Yeti, allowing him to return to Monstropolis.

Yeti plush from the Disney Store 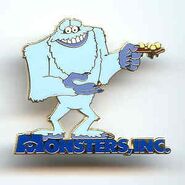