Disney Wiki
Register
Don't have an account?
Sign In
Advertisement
in: Characters, Characters in Disney parks, Males,
and 13 more

Snooty Flamingos trying to mess with him
Yo Yo Flamingo is the star of the animated short Carnival of the Animals, Finale featured in Fantasia 2000. He is a pink flamingo who is separated from the other flamingos due to his love of yo-yos.

Unlike the rest of the flamingos, Yo-Yo is free-spirited and just wants to have fun.

As the short starts with the flamingos waking up and walking across the water, Yo Yo was left behind playing with his yo-yo. The other flamingos find him and stop his playing and make him practice alongside them. Yo Yo (upset) joins in the practice; although he was practicing with them he managed to play with his yo-yo too hence his name. The snooty flamingos catch him and a chase began until he sees them spinning on a branch where he spins his toy to copy the flamingos until they chase him again.

Yo Yo Flamingo alongside Clara Cluck in House of Mouse

Yo Yo Flamingo clipart 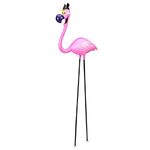