Snooty Flamingos trying to mess with him

Playing all of his Yo-Yos while the Snooty Flamingos are tied up (Originally ended with him playing with a paddle ball)
Yo Yo Flamingo is the star of the animated short Carnival of the Animals, Finale featured in Fantasia 2000. He is a pink Flamingo who is separated from the other Flamingos due to his love of Yo-Yos.

Unlike the rest of the flamingos, Yo-Yo is free-spirited and just wants to have fun.

The short started with the flamingos waking up and starting the swimming. Yo Yo was left behind playing with his Yo-Yo. The other Flamingos find him and stop his playing and makes him practice along side them. Yo Yo (upset) joins in the practice. Although he was practicing with them he managed to play with his Yo-Yo too. The snooty flamingos catch him and a chase began. Yo Yo managed to get them stuck in a log. While they were stuck Yo Yo plays with his toy. The other flamingos rise from the water and drown Yo Yo. While he's under water, they throw his Yo-Yo into a tree. Yo Yo then ties the other flamingos up with Yo-Yo strings. Yo Yo rises from the water and it is revealed he has hundreds of Yo-Yos. Yo Yo prevails and the short ends.

Yo Yo Flamingo alongside Clara Cluck in House of Mouse 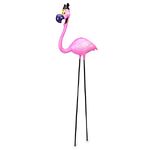 Retrieved from "https://disney.fandom.com/wiki/Yo_Yo_Flamingo?oldid=3807442"
Community content is available under CC-BY-SA unless otherwise noted.