To wipe out The Skrull race and Earth (failed)

I didn’t lie to you, I made the best version of yourself you could ever become.

Yon-Rogg is a Marvel Comics character created by Stan Lee and Gene Colan.

He is the Kree commander of Starforce and the main antagonist of Captain Marvel, being Captain Marvel/Carol Danvers archenemy and the direct threat to her and her mission. He is a ruthless conqueror answering to the Supreme Intelligence, dedicating to genocide and conquering other races for the glory of the Kree empire. When he and the rest of the Kree target the Skrull, it sets a chain of events that leads to Captain Marvel rebelling against him and using her powers as a protector of the innocent. 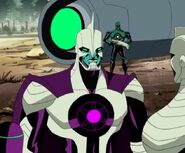 Retrieved from "https://disney.fandom.com/wiki/Yon-Rogg?oldid=3765276"
Community content is available under CC-BY-SA unless otherwise noted.