Slender and attractive teenaged boy with blonde hair, blue eyes and fair skin; later becomes rather plump but that is the only physical change apart from his height.

To messes with his twin brother, Cody, hanging out

Bothering his brother, crushes on girls

"Hot babe at 12:00"
"Look, I know my brother and he won't hold this against me"
"Hey, Sweet thang..."
Zachary "Zack" Martin is the main protagonist in The Suite Life of Zack and Cody and The Suite life on Deck. He used to live in Boston in the Tipton Hotel until the age of 15 when he went to live on the SS Tipton, A Cruise Ship based on the Tipton Hotel. He lived on the SS Tipton With is twin brother, Cody Martin. Cody is so much different from Zack, he is a strait a student, much smarter, and has had less girlfriends.

Born ten minutes before his identical twin brother, Cody, Zack was born at St. Joseph's Hospital (known now as St. Joseph's Medical Plaza) in Seattle, Washington on a Sunday at 6:30 am in 1992. He traveled the nation with Cody and his mother Carey before finally settling into the Tipton Hotel as seen in the first episode of the series, "Hotel Hangout".

Zack is shown to have a Swedish heritage; in the episode "The Swede Life", Zack and Cody visit Sweden which they detail as the home of their ancestors.

The Suite Life of Zack and Cody

Moved into the Tipton against their will, Zack and his brother Cody are forced to live with the bare minimum in a hotel suite while their mother sings in the lounge several nights a week. They are finally "settled", and make friends in school, though not without issue. Zack is best known for his pranks and jokes around the hotel, and usually gets a more severe punishment than his brother Cody. Though Zack is not as intelligent as his brother, he shows that if he works hard, he can accomplish anything.

Zack moves up through middle school with his brother and they encounter several problems both there and at home, often with Mr. Moseby or their mom. He eventually reaches high school, and an opportunity opens up for him and his brother to attend school aboard a cruise ship, the S.S. Tipton. The boys' mom, with her employment discount, sends them off into the world.

The Suite Life on Deck'

After accidentally losing a letter Cody wrote to Bailey, Zack reveals Cody's plans to leave the S.S. Tipton to attend a science internship. Shortly after, he asks Cody for the car which Cody would receive as a gift when going to college, but Cody refuses. Following this, still not having the car, Zack decides to follow Cody to his internship at a prestigious Vancouver science facility. Zack, trying to impress one of the assistants at the lab, ends up destroying some very expensive equipment. Cody then reveals that he hates Zack and doesn't think of him as a brother. Dr. Olsen, who is at the time disguised as Dr. Spalding, realizes that they would be perfect for the Gemini Project. He offers; they accept, and both eventually agree and arrive on the island.

The first phase of the project is to eat a specific fruit, this then causes the boys to be interconnected physically and feel each other's pain. The second phase then takes effect and they are able to think each other's thoughts. This then leads to a big fight and prompts Zack to leave the project. Zack is then reassured by Nellie that they need Zack there and he decides to stay. The boys then work out there problems and quickly overhear Dr. Olsen telling Nellie that Cody must lose his brain.

The two then sneak into Dr. Olsen's lab and learn about the other two stages. The third stage is that the two twins minds will combine to make one personality. The fourth and final stage is the hive, which would then allow Dr. Olsen to control all twins that have progressed to stage three. Dr. Olsen then catches the two sneaking around and tries to capture them, ordering all the twins to get Zack and Cody.

Dr. Olsen finally captures the twins and they are pinned to chairs in order to complete stage three. But Bailey, London, Woody, and Dr. Spalding rush in to stop him. Unfortunately, Olsen puts up an electric force field and states that no one can stop him. Dr. Spalding tells Dr. Olsen to show everyone who he really is, and it is revealed that he is Dr. Spalding's evil twin brother. He pushes the button and Cody and Zack begin to merge. The twins argue while they are merging and their conflict destroy the machine. The twins are freed and they rush up to their friends, though Dr. Olsen doesn't give up, and attempts to merge the twins again. Bailey ropes him using her lasso, rendering his plans futile. Dr. Spalding and Dr. Olsen are then given the same fruit that Dr. Olsen gave to Zack and Cody, which causes Dr. Olsen and Dr. Spalding to reveal how they feel about each other. Mr. Moseby then comes in with the police, taking Olsen away after he and Spalding had just made up.

Finally, Zack receives the car from Cody, only to have the car become crushed by an intermodal container.

Zack is a "player" when it comes to girls. Zack is not nearly as smart as Cody, and can be described as lazy. Zack is very good at sports such as basketball, baseball, and football. Even though he insults Cody, he is shown to be protective when other people are mean to him.

Unlike his brother Cody, who loses most of his prankster antics, Zack is still fond of pranking people throughout both of the series regardless of the often high consequences and already knowing he will be the first person blamed. He seemingly has an affinity for trouble making.

Zack is usually shown to be extremely lazy school-wise, in sharp contrast to his book smart brother. In "Goin' Bananas", he implicitly states that he would try harder; however, because of his brother's over-achieving personality, he explains that nothing he ever does is good enough. In line with this idea, despite Zack's obvious moments of intelligence, he can be short-sighted and lacking in his thoughts, making him appear dumb to others. He always relies on Cody to do his homework and school projects as Cody is clearly the more intelligent of the two. Zack is also a very good strategist, since the first episode he is shown to be able to make quite good plans that usually succeed or would succeed if an unseen second or third party didn't intervene.

In "The Ghost and Mr. Martin", Zack changed history when he learned of the tampered compass.

Zack has, on two occasions, proved to be an expert in surviving in the wild with little more than the shirt off his back. He's also an expert fisherman. Soon after he became a grizzly scout became the second highest person there, he also is good at tracking and stealth. In "Lost at Sea", he talks about having got neat hundreds of awards for many things, including saving someone (Cody's) life (despite claims from Cody that it was Zack who landed him in the situation), which, to Cody's dismay, also impresses Bailey very much.

In the episode "Books and Birdhouses", Zack is shown as very talented in making things out of wood, in the episode he was top of that class and was his teacher's favorite student.

Like his brother, Zack is about four feet tall with short blonde hair at the start of the series. He generally wears long-sleeved shirts with t-shirts over top, and skater pants or shorts along with skater shoes. Of the two, he generally appears to be far more laid back than his brother, who usually wears more formal clothing. Before the start of The Suite Life on Deck, Zack grew his hair longer, to be around shoulder length. As the series progresses, Zack grows to around five-foot-ten tall, and cuts his hair back to a much shorter length.

Zack likes and flirts with many girls, but has never really had one long-term girlfriend, although he seems to be serious with his current girlfriend, Maya. In "Prom Night", they take each other for dates. 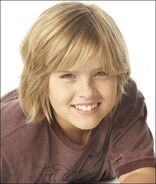 Add a photo to this gallery
Retrieved from "https://disney.fandom.com/wiki/Zack_Martin?oldid=540387"
Community content is available under CC-BY-SA unless otherwise noted.