Cornelius (uncle)
Zelda (cousin)
Zack Underwood is one of the two deuteragonists of Disney Channel's Milo Murphy's Law. The former main vocalist of the boy band known as the Lumberzacks, he is the best friend of Milo Murphy and Melissa Chase. Although Zack enjoys hanging out with Milo due to his abnormal life, he also usually serves as the voice of reason when things get out of hand.

Zack was the new kid whose family just moved to Danville. He befriended Milo Murphy and Melissa Chase and they formed a trio. They went on misadventures together and formed close relationships with Milo and Melissa (even developing a crush on Melissa). Zack was also a former Lumberzack, a boy band that was popular throughout Quad-State Area. Zack (along with Milo and Melissa) goes on to befriend time travelers Balthazar Cavendish and Vinnie Dakota. When Heinz Doofenshmirtz moves in with the Murphy's, Zack is annoyed by Doofenshmirtz and calls him annoying and obnoxious. Zack goes on to admit his crush on Melissa and fights with his friends on the planet Octavia to stop the Sphere of Calamity. 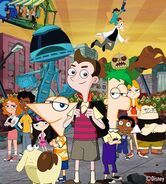