“As a lifelong author, I have often drawn inspiration for the more chilling of my tales from my own experiences as a young man living in Louisiana after the Civil War. Oh. But the story of Ezekiel Holloway...that I have not dared tell before now.”
―Zeke Holloway, during the game's introduction

Ezekiel "Zeke" Holloway is the protagonist of the video game adaptation of The Haunted Mansion.

Role in the game

According to the storyline, Zeke was originally an orphan and grew up in Louisiana. He applies to become the caretaker of the mansion. Zeke needed to work in the mansion in order to help his finances in becoming a writer. With the help of Madame Leota, Zeke is given a magical lantern known as the Beacon of Souls, which is a magical weapon to be used against the unruly spirits of the mansion. Despite being a coward, he helps save the mansion from Atticus Thorn's conquest of the afterlife.

Zeke goes around the mansion, overcoming the dark barriers and twisted spells Thorn has erected around each of the rooms. Along the way, he reacquires each of the missing Soul Gems to restore the Beacon's powers and captures Shriveled Souls hidden in each area. Finally, after acquiring the Seaman's Ring from one of the friendly ghosts, Zeke unlocks a hidden chamber in the foyer.

Zeke finally encounters Atticus Thorn in the Vault of Shadows. After a lengthy and grueling battle with the Order of Shadows' Grandmaster, Zeke triumphs, freeing the trapped souls in the mansion at last. He later stays on as caretaker of the estate before finally pursuing his career as a writer.

Zeke about to faint. 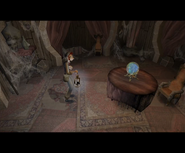 Zeke saving the game at a grandfather clock

Zeke meets up with Doc Penezek, one of the resident ghosts.

Zeke examines one of the Shadow Tomes.

Zeke with one of the singing busts.

Zeke facing a gargoyle in the mausoleum.

Zeke finds himself among debris in space.

Zeke facing off against Thorn.