Destroyed in a star

Zenith is an advanced starship that appears in the Disney Junior animated series, Miles from Tomorrowland. It is the Mission Center's fastest starship, with similar functions to other ships in the TTA, including an interactive computer called Zeno. Crewed by Mission Force One and under the command of Captain Miles Callisto, the Zenith's mission is to Connect and Protect the universe. 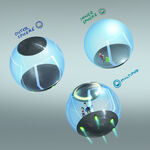