He is known for his voice role on Cartoon Network with Ben 10: Alien Force and Ben 10: Ultimate Alien as Alan Albright and in anime such as One-Punch Man where he voiced Bunbunman and Superalloy Darkshine and the revival Cyborg 009: Call of Justice where he voiced Cyborg 008 / Pyunma. He was also Cyborg in Young Justice: Outsiders, where he infamously said the words "You ruined me."

For Disney, he voiced Randy Robertson on Marvel's Spider-Man and earned a recurring role on Big City Greens as Remy Remington. 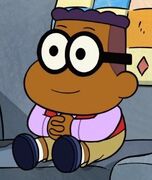 Remy Remington
(Big City Greens)
Add a photo to this gallery
Retrieved from "https://disney.fandom.com/wiki/Zeno_Robinson?oldid=4112955"
Community content is available under CC-BY-SA unless otherwise noted.