March 25, 2017
"Zero Hour" is the two-part season three finale, comprised of the fifty-eighth and fifty-ninth episode of the Disney XD animated series, Star Wars Rebels. It premiered on March 25, 2017, and is the collective twenty-first and twenty-second episode of season three.

Thrawn arrives on Lothal with some urgent news. Taking it up in secrecy, he briefs Govenor Pryce, Admiral Konstantine, and Grand Moff Tarkin, via hologram, of his findings: He has discovered the Rebels' plan to assault their Imperial TIE Defender factory on Lothal. He has also received word from his spies that General Dodonna's fleet is on route to reinforce Phoenix Squadron, but still has yet to uncover the location of their base. Govenor Pryce finds a coordinated attack by multiple Rebel cells unprecedented, but is also the moment that Thrawn has been waiting for to wipe out the Rebellion. Using a mouse droid to listen in, Agent Kallus hears everything and immediately heads for Ezra's Tower, where he has been sending his "Fulcrum" messages, to warn the Rebellion. However, before he could send out the details, he discovers that he has been followed when Thrawn shows up in the doorway. He tackles the Grand Admiral in a fist fight, but his skills are outmatched and is easily beaten. After a brutal interrogation, Thrawn manages to pinpoint the precise location of the Rebel base, and has the fleet deployed to Atollon.

Meanwhile on Atollon, Phoenix Squadron is all prepared for their attack on Lothal, However, upon General Dodonna's arrival, Kallus was able to send his message to the Rebels before he was captured. The only thing he was able to send out was that "Thrawn knows". They immediately suspect that Thrawn knows where they are, and it is confirmed when they receive word from Ryder Azadi that the Imperial fleet over Lothal had just left. The Rebels are forced to scrub their mission to attack the TIE Defender factory on Lothal and evacuate Chopper Base, just as Imperial Star Destroyers emerge from hyperspace. General Dodonna's fleet attempts to escape, but they are pulled out of hyperspace by two Imperial Interdictor vessels armed with gravity well generators to prevent hyperspace jumps. Just then, Thrawn's flagship arrives and contacts Chopper Base. Hera refuses to cooperate on any of Thrawn's terms, but Thrawn has no intention of taking prisoners. After a brief conversation with Thrawn, Hera conjures up a plan to call for reinforcements and help them escape. She suggests that by disabling one of the Interdictors, they will have a chance to allow one ship to escape. Hera volunteers Ezra and Kanan to take the Gauntlet Fighter, however Kanan chooses to stay in hopes of finding some help. So it is just Ezra who will go, accompanied by Chopper.

The Ghost and the Gauntlet show up with the fleet, just as Commander Sato launches the first squad of fighters. Thrawn has the TIEs deployed and the battle begins. Back on Atollon, Kanan goes to The Bendu and pleas for his help in fighting off the Empire. However, Bendu is furious with what the Rebellion has brought upon his peaceful world, and refuses to assist them in their fight. The Rebel fleet is even having a harder time trying to take on the Imperials, and with one of the Interdictors still cutting them off, Ezra and Chopper cannot escape. Already, the Rebels are losing a lot of ships, in both fighters and frigates, so Sato chooses to sacrifice himself and two loyal Rebel crewmen, after ordering the rest to abandon ship, by colliding his flagship into one of the Interdictors. He succeeds and takes Admiral Konstantine with him, who tried to intercept against Thrawn's orders. With one of the Interdictors destroyed thanks to Sato's sacrifice, Ezra and Chopper are able to escape to hyperspace. Thrawn is furious by Konstantine's carelessness, and has the surviving Rebel ships be forced to retreat back to Atollon. Meanwhile, Kanan is still unable to to convince Bendu to help, and after calling him a coward, Bendu disappears in rage.

Traveling through hyperspace, Ezra makes contact with Mon Mothma and pleas for her help. However, she feels hopeless in this matter, and deeply regrets engaging in open warfare against the Empire so soon. Ezra on the other hand refuses to give up, and sets a course for Krownest to enlist Sabine's help.

The Rebels remain trapped on Atollon with the Imperial fleet still blocking their escape due to the remaining Interdictor and its gravity well generators. They power up a shield around the base for protection, and only hope that it will hold. All the while Kanan makes his way back to base, Thrawn commences an orbital bombardment upon the base. The shield holds, but barely until Thrawn ceases fire. At the same time, Kanan notices a storm brewing, which makes him suspect that something is coming. Meanwhile, Ezra makes it to Krownest and informs Sabine about Thrawn's ambush on Atollon. He asks her and the Mandalorians for help, only to be told he has come at a bad time. They are in the middle of a civil war against Clan Saxon. Despite this, Ursa is willing to hear Ezra out. Observing the problem, the Mandalorians do not see any chance of them succeeding. However, Sabine stands by Ezra and strongly believes there is a way to save the Rebellion. Ursa, who is grateful for Ezra and his friends bringing Sabine back to her, stands by her daughter's side. With only minimal resources to spare, Sabine comes up with a plan that will not require a whole army to take on the blockade.

Back on Atollon, Thrawn leads a ground assault on the surface, while Govenor Pryce remains in command of the fleet. The Rebels are ready for Thrawn, and engage their walkers. Kanan joins in the fight, and makes his way back to Chopper Base with Zeb and Rex for one last attempt to evacuate. Just then, Ezra and Chopper return with Mandalorian reinforcements. Leading the fighters, Fenn Rau engages the Imperials while Ezra and Sabine attempt to lead a strike team to take out the last Interdictor. They inform the Rebellion of their arrival, and they make no haste to evacuate the base. Suddenly, the Imperials take out their shield generator and Hera, Kanan, Zeb, Rex, and Dodonna become surrounded by Thrawn's men. As Thrawn believes to have won the battle, the storm earlier on draws closer. Suddenly, intense lighting strikes the base. It is The Bendu, who has come to bring death upon the Rebels and Imperials.

Meanwhile, Ezra and Sabine lead a strike team on the hull of the last Interdictor. They attack the gravity generators, and Governor Pryce orders an attack to stop them. Back on the surface, both the Rebels and Imperials are at Bendu's mercy, who orders them to leave his world. The Rebels retreat to their ships and take off. The Bendu attacks the Rebels with his lightning strikes, but they succeed in leaving the planet. Thrawn orders his forces to attack the Bendu, and they succeed in shooting him out of the sky. As the Rebel fleet approaches the blockade, Ezra and the Mandalorians succeed in taking out the Interdictor. The Mandalorians shoot missiles at one of the gravity generators, causing a chain reaction that destroys the whole ship. Kallus escapes from Pryce aboard an escape pod, and the Ghost salvages him before jumping to hyperspace with the surviving fleet. The Rebels have escaped, leaving Thrawn and Pryce defeated.

Back on Atollon, Thrawn and his men arrive where The Bendu fell. Before shooting him and disappearing before the Grand Admiral's eyes, the Bendu reveals that in Thrawn's future he will face a cold defeat. Meanwhile, the remaining members of the Rebel fleet are on their way to Rebel Command on Yavin 4. Hera gives her thanks for Ursa's assistance, and Kallus thanks Kanan for taking him in. Even though they have suffered a crushing defeat, Kanan still has high hopes for a future where everyone is free from the Empire's reign of tyranny. With those last words, the surviving Rebel ships and fighters jump to hyperspace. 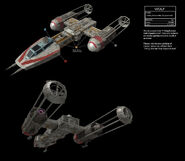 Retrieved from "https://disney.fandom.com/wiki/Zero_Hour?oldid=3881898"
Community content is available under CC-BY-SA unless otherwise noted.