Pilot (1)
Co-Pilot(1)
The Zeta-Class Cargo Shuttle is an Imperial cargo shuttle that appears in the Star Wars movie Rogue One.

The shuttle features two levels: an upper deck that housed the ship's command functions, and a ventral cargo deck that could be detached and dropped off at a location. The four wings on each side of the shuttle can retract inwards when landing and outwards when in flight, similar to the Lambda-class T-4a shuttle. In terms of armament, the shuttle features two wing-mounted heavy laser cannons and three hull-mounted laser cannons. 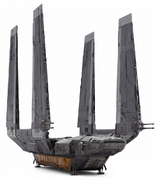 This object article is a stub. You can help Disney Wiki by expanding it.