This article is about the character from a segment of Fantasia. For other characters by the name, see Zeus.

King of the Gods, God of Lightning

The Mount Olympus citizens getting away

Active
Zeus is a character in the "Pastoral Symphony" segment of the 1940 film Fantasia. He interrupts Bacchus' party with the centaurs, centaurettes, cherubs, and Pegasus, throwing lightning bolts for his personal entertainment.

A more accurate depiction of his mythological counterpart rather than the more benevolent incarnation seen in Hercules, Zeus is more of a malevolent mischief-maker who doesn't really think of how his actions affect beings below and is more focused on creating amusement for himself with his storms.

Zeus is a giant god with a blue robe, white beard, and blue eyes. He is slender but muscular.

Zeus interrupts Bacchus' party and creates a powerful thunderstorm, working with Vulcan on throwing lightning bolts as well as creating terrible winds to drive the storm. Eventually, he grows bored with the mayhem and decides to cease his activity to rest, causing the storm to subside. 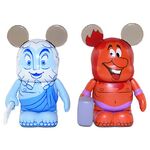