Shovel
Ricky, nicknamed Zigzag, is a supporting character from the 2003 film, Holes.

Whn Ricky was young, he had a classmate in his math classes named Keith Barenger

When Stanley "Caveman" Yelnats finds the lipstick barrel of Kate Barlow, Zigzag jokes that the 'KB' label stands for his ex-classmate.

When Mr. Sir saves Stanley from a yellow spotted lizard, Zigzag and Magnet begin taunting him about its blood and how deadly it can be.

He and Caveman later get into a fight because Zero helped him dig his holes. This ended with Zero leaping on Zigzag's back and proceeding to choke him violently.

Zigzag is known for his wild, frizzy hair and crazy antics, it's mentioned by Squid that he might suffer from acute paranoia, thinking that the Warden has cameras in the showers. 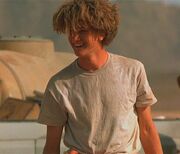 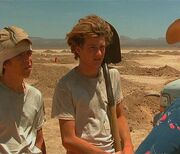 Retrieved from "https://disney.fandom.com/wiki/Zigzag?oldid=4370308"
Community content is available under CC-BY-SA unless otherwise noted.