Not having a mate, being bullied by Kron, messing up

“Hey, look what I found! New neighbors! Any of you ladies up for a game of 'Monkey in the Middle'?”
―Zini[src]

Zini is a lemur and a supporting character from Disney's 2000 CGI film Dinosaur.

Zini likes making wisecracks and is noticeably into girl lemurs, he is Yar's son, Suri's uncle, and Plio's brother, as well as Aladar's best friend, when he fails to attract any females during the mating ritual, he becomes a bit disappointed. However, by the end of the film, he finds a number of girl lemurs on the Nesting Grounds who are all attracted to him, much to his joy and delight.

Zini is first seen in the movie as a kid lemur when a dinosaur egg falls on Lemur Island, where he lives with his father Yar and his older sister Plio. As the other lemurs gather around the fallen egg, Zini tries to get closer, but Yar stops him, telling him it's not safe. After the egg cracks, Zini's sister Plio opens the shell and is happy to see a baby Iguanodon. She holds the baby in her hands and decides that she will raise him. Yar objects because he says that one day he will eat them, but he eventually accepts the baby after it urinates on him, and Plio reaffirms him that the baby will learn not to eat meat; she names the baby Aladar. Yar reluctantly lets her keep the hatchling, but warns her that he may bite. Zini goes over to the baby Iguanodon and checks its mouth before saying: "This monster's got no teeth. What's he gonna do, gum us to death?"

Years later, Aladar has grown up a vegetarian dinosaur, thanks to Plio's care. Later, Aladar watches Zini, now a young adult lemur, as he practices lines for picking up girl lemurs. During the mating ritual, all the male lemurs are given a pep talk by Yar before they swing from their vines, and each attempts to get a female lemur. Every lemur ends up finding a mate except Zini, who snags his feet on a vine before he could even swing forward. By the time he unsticks himself, all the female lemurs have left, much to his disappointment. Aladar tries to comfort Zini, who seems to take it okay and believes he will get another chance at finding girls.

Shortly after the ritual, Plio is present when a fireball falls from the sky, causing violent tremors. Other fireballs soon start falling, destroying the island. Plio urges Aladar to run and he takes her, Yar, Suri and Zini on his back, and they escape the island by jumping across the sea to the mainland. Zini and the others are devastated that everyone on the island was killed by the fireballs, and that he and his family are the last ones of their kind.

For the next few days, they wander through deserted lands until they find a dinosaur herd led by Kron. Zini is the first one to make a wisecrack to the high-and-mighty Iguanodon. Kron glares at Zini and his family and warns them to stay out of his way before heading on with his second-in-command Bruton and his sister Neera. Zini and the others learn that the herd is going to the Nesting Grounds. There, they befriend some of the elder dinosaurs: Baylene, Eema and Url who are at the end of the herd because they are too old to follow the rhythm of the others.

After several days of rough marching, Bruton (who had been attacked by Carnotaurs) informs Kron that Carnotaurs are following them so Kron decides to accelerate the pace, not caring if someone is left behind. Because of this, Aladar, the lemurs, Baylene, Eema and Url separate from the herd. On a rainy night, they find shelter in a cave. They also find a wounded Bruton who has been banished from the herd by Kron. Despite the obvious, Aladar helps a reluctant Bruton into the cave. While Plio tends to Bruton's wounds, he asks her why she is giving them false hopes, but Plio reassures him that hope is the last thing that gets lost and that he is welcome to follow them. That night when two Carnotaurs attack them, everyone manages to escape deeper in the cave, but Bruton dies in the process while saving them, and the entrance of the cave is blocked by the falling rocks.

Later, after wandering for hours in the cave, Suri and Zini start smelling something. Plio and Yar smell the same thing, and so they start digging through the rocks to discover a ray of light; however, more rocks fall and cover the exit. Aladar screams in frustration and gives up, but Baylene says that they didn't come this far only to give up, and so everyone starts to push the rocks until they discover something amazing: they have arrived at the Nesting Grounds. Plio is happy that they have finally arrived at their new home, and she with Yar watch happily as Suri, Zini and Baylene jump into the lake. Aladar then goes to warn the rest of the herd about the cave entrance.

Months later, Aladar and Neera have babies of their own, and Zini is seen surrounded by many girl lemurs who all want to date him, much to his delight. 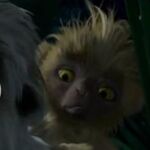 Young Zini with his father Yar