Disney Wiki
Register
Don't have an account?
Sign In
Advertisement
in: People, Actresses, Pirates of the Caribbean,
and 18 more

Cy Aridio Perego-Saldana
Bowie Ezio Perego-Saldana
Zen Perego-Saldana
Zoe Yadira Saldaña Nazario, known by her stage name as Zoe Saldana or Zoë Saldaña, is an American actress and dancer, who had her breakthrough role in the teen films: Center Stage as Eva Rodríguez, and Crossroads as Kit. She is also known for her roles as Nyota Uhura in Star Trek, Captain Celaeno from My Little Pony: the Movie Neytiri in James Cameron's Avatar and is featured in Pandora: The World of Avatar at Disney's Animal Kingdom, and Cataleya Restrepo in Colombiana.

Anamaria
(Pirates of the Caribbean: The Curse of the Black Pearl) 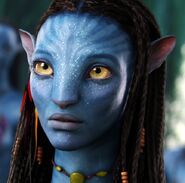 Zoe Saldana at premiere of Avatar in December 2009.

Zoe Saldana at premiere of Guardians of the Galaxy in July 2014.

Zoe Saldana at her Hollywood Walk of Fame ceremony in May 2018.
Community content is available under CC-BY-SA unless otherwise noted.
Advertisement