Zombies 3
Zombies 2 (stylized as Z-O-M-B-I-E-S 2) is a Disney Channel Original Movie, the sequel to the 2018 film, Zombies and second installment. A short teaser played during the premiere of Descendants 3. It was released on February 14, 2020.

The sequel picks up at Seabrook High, where, after a groundbreaking semester, Zed and Addison continue to steer both their school and community toward unity. But the arrival of a new group of outsiders - mysterious werewolves - threatens to shake up the newfound peace and causes a rift in Zed and Addison's budding romance.

In the earlier days of Seabrook, settlers fought off a group of werewolves from a moonstone that they have since kept hidden underground. In the present, time has passed since Seabrook and Zombietown settled their differences. Zed plans to ask Addison to the prawn, while Addison works to become the new cheer captain when Bucky steps down to become president. Due to a road incident caused by Zed's prawnposal, the bus carrying the cheerleaders crashes into the nearby forbidden forest; Addison and the cheer team see the werewolves and freak out. When they get back to Seabrook, the whole town freaks out, and the mayor reinstates the anti-monster laws. This notably means that the zombies cannot go to prawn. Zed realizes if he runs for president, he can change things for both the zombies and werewolves.

Meanwhile, the local werewolves are getting sick. They have moonstone necklaces which give them the werewolf abilities; without them, they can die. These moonstones are losing their power, so they need to find the moonstone in order to recharge their necklaces. Prophecy states that a girl with white hair, called the Great Alpha, will show them where this moonstone is. They begin to suspect Addison is the Great Alpha, so they enroll at Seabrook High to get closer to her, which Addison welcomes with open arms. As the werewolves are in Zombietown, Zed tries to rally the wolves to help him win the election, but they do not see the point of changing who they are to fit in. At cheer practice, the werewolves join in; as Zed and Eliza walk in, they suspect that Wyatt, one of the werewolves, has a thing for Addison, which makes Zed jealous. Addison follows Zed out into the hall, and they get into a little argument that makes them question where they truly belong.

The werewolves eventually bring Addison to their den, where they tell her the prophecy, and Addison is excited to be a part of something spectacular. The werewolves give her a full charged moonstone necklace, which they have saved for the Great Alpha. If she puts it on and is truly a werewolf, she will transform into one; shortly thereafter, Zed, Bree, Eliza, and Bonzo find Addison in the wolf den after tracking her, thinking she was in trouble. Zed attempts to save Addison from the werewolves, but Addison tells him she wants to be there and that she has finally found her pack. Zed gets defensive and says that she does not want to be a monster and tells her not to put on the necklace. The werewolves agree to give her one day to decide. They feel an explosion, and it is said that they are destroying the power plant which created the zombies. Addison realizes that the building is fueled by a mysterious energy source, so that must be where the moonstone is. If the power plant gets destroyed, it will crush and destroy the moonstone along with it. The next day, Addison shows Zed the necklace and tells him that she is going to put it on, and Zed tells her not to and discretely takes it when she is not looking. When Addison finds the werewolves, she realizes it is missing, leaving the wolves disappointed with her. Zed goes to his presidential debate against Bucky. He wins over the humans, but when the Z-band shorts out due to Addison's moonstone. Zed becomes a full zombie and everyone runs away screaming, which causes Zed to lose the election.

Meanwhile, the werewolves head to Seabrook Power, where the alarm immediately goes off and the Zombie Patrol and workers, along with Dale and Zevon. As Addison and Bree are talking at the school, they hear the alarm and realize that they need to help the werewolves. The werewolves get arrested at the demolition site when they release silver gas, their one weakness. Addison arrives with the cheerleaders and zombies, who finally agree to not destroy the building. They all go outside to celebrate, when Zed reveals to Addison that he took the necklace from her. She gets mad at him and tells him that they should not go to prawn together and puts on the necklace, but finds out that she is not a werewolf after all. One of the men in control of the device controlling the demolition shorts out and causes the whole building to be destroyed. The werewolves get very sick and retreat back to their den. Zed heads to the den to find them sick and dying, when he tells them that he is proud that they do not change who they are and they embrace that they are monsters.

Prawn night arrives and Zed as well as the rest of the zombies and werewolves realize rules are meant to be broken and crash the prawn. Everyone dances and Zed and Addison make up and sing; however, the ground starts shaking and splits in half with a blue glow from the hole. The werewolves realize that the moonstone is not destroyed and go in the hole to find it; the humans and zombies follow to help. They find the moonstone and the werewolves recharge their necklaces. They then try to get the moonstone out when a huge boulder blocks their exit. Zed removes his Z-band and uses his zombie strength to lift the boulder and allow the others to bring the moonstone out safely. They all go back to prawn and sing and dance and have fun, with Zed and Addison having their first kiss.

Before the credits, a blue glowing rock falls from the sky at night, causing a blue explosion. This causes Addison's radio to freak out; later, after waking up, her hair glows bright blue for a short moment, foreshadowing a threequel. 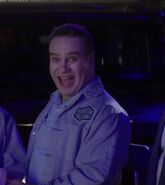 Never Have I Ever Challenge with Meg Donnelly! ZOMBIES 2 Disney Channel

Never Have I Ever Challenge with Milo Manheim! ZOMBIES 2 Disney Channel

The “We Got This” Music Video is Coming! 📣 Teaser ZOMBIES 2 Disney Channel

Behind the Scenes of "We Got This" ZOMBIES 2 Disney Channel

ZOMBIES 2 We Got This Disney Channel x DanceOn

The Werewolves Are Coming Side by Side ZOMBIES 2 Disney Channel