The Zootopia police officers work to ensure the safety of the citizens.

The officers are also known to prejudice against prey and other predators based on stereotypes, such as Judy Hopps who is the first rabbit to join.

Before their commanding officer, Chief Bogo, makes his debut, they do take in some relaxation such as chatting, arm-wrestling, or checking their phones.

Each officer is assigned a case either with two or three partners, or go solo.

After the exposure of Bellwether's plot and her arrest, the officers go on equal terms with their co-workers, such as apologizing to Clawhauser, and accepting Judy Hopps and Nick Wilde, the first fox officer. 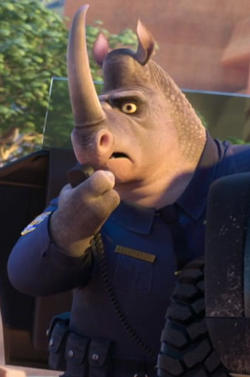 Officer McHorn (voiced by Mark "Rhino" Smith) is a rhinoceros.

McHorn seems to show disinterest in those who he deems his lessers, including Judy Hopps. This manifests itself in the way in which he dismisses Judy upon her introduction, as well as when she enters Little Rodentia to chase Duke Weaselton, telling her to "wait for the real cops".

While it could be argued that this was supposed to be to keep Judy from harm, or even to make sure that Weaselton actually was caught, if she actually heeded his warning, then Weaselton easily could have escaped through Little Rodentia, or worse, larger police officers would have caused more destruction in the rodent town.

This shows a particularly brash and proud side to his personality. As such, he is portrayed as fairly distant and unlikeable, though to what extent this is true is unknown.

He was first seen during Judy Hopps' first roll call, as he is sitting next to her for the majority of the time there. She attempts to fist-bump him, but he uses this as a means to push her away.

Shortly after, he is assigned by Chief Bogo to search for the Missing Mammals in Sahara Square with Officers Rhinowitz and Wolford.

Later on, as Judy is chasing Duke Weaselton, McHorn's police car skids to a stop just in front of the weasel, and Weaselton uses this as an obstacle to stop his pursuer from continuing the pursuit. McHorn radios the ZPD headquarters, but Judy continues to chase the thief.

As she enters Little Rodentia, being the only officer that can fit through the small gate, he tells her to wait for "the real cops", as he doubts her ability or judgment because she is new to the force. 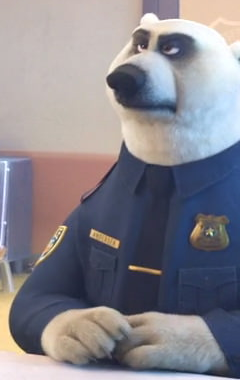 Officer Andersen[4] is a polar bear.

As Judy Hopps walks into the bullpen on her first day as a police officer, Andersen is seen in an arm wrestling contest against Officer Johnson. He ends up pinning the lion's arm to the table, causing laughter from the other officers and surprise from Judy. 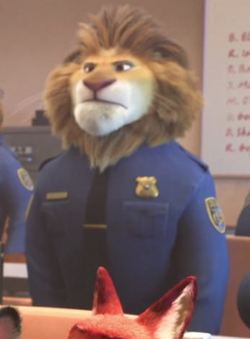 Officer Delgato is an African lion.

On Judy Hopps' first day at the ZPD, Chief Bogo assigns Delgato to the Rainforest District to search for missing residents along with officers Grizzoli and Fangmeyer.

Near the end of the film, on Nick Wilde's first day as an officer, he is assigned to Tundratown SWAT, again with Grizzoli and Fangmeyer.

In Spanish, "del gato" translates to "of the (male) cat". 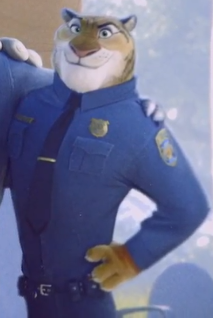 Officer Fangmeyer[3] is a tiger.

During the investigation on the 14 missing mammals and on Judy Hopps' first day on the beat, Fangmeyer is assigned with officers Grizzoli and Delgato to the Rainforest District to search for residents missing there.

Following the Night howler scandal, and on Nick Wilde's first day on the beat, Fangmeyer is once again assigned with Officers Grizzoli and Delgato, but this time to Tundratown SWAT.

There was initial confusion over Fangmeyer's species as being a wolf or a tiger. It was then clarified by writer Jared Bush that at one point during the film's production, Officer Fangmeyer was intended to be the white wolf seen in the force,[5] before the character was shifted to a tiger instead.[1][2][3] 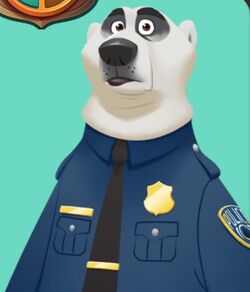 Officer Grizzoli[1] is a polar bear.

On Judy Hopps' first day at the ZPD, Chief Bogo assigns Grizzoli to the Rainforest District to search for missing residents along with officers Delgato and Fangmeyer.

Near the end of the film, on Nick Wilde's first day as an officer, he is assigned to Tundratown SWAT, again with Delgato and Fangmeyer.

Grizzoli was first visually identified in the game Zootopia: Crime Files as a polar bear, although writer Jared Bush has referred to him as "Grizzoli the Grizzly", suggesting he is a grizzly bear.

Further adding to the confusion, the film has Chief Bogo to call Grizzoli, Fangmeyer, and Delgato. A lion, a white wolf and a tiger are then seen getting up and leaving, but no bear.

Co-director Rich Moore has said that Delgato is a lion and Fangmeyer is a tiger (the latter of which is also supported by Zootopia: Crime Files), which would suggest Grizzoli to be the white wolf. 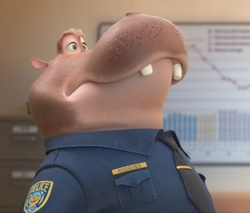 Officer Higgins (voiced by Raymond S. Persi) is a hippo.

Higgins is first seen near the beginning of the film on Judy Hopps' first day on the force checking a clipboard. He announces Chief Bogo's arrival and sits down.

He is then assigned to Tundratown, along with officers Officer Snarlov and Trunkaby, to search for the mammals that have gone missing there.

Near the end of the film, when Officer Clawhauser returns to his position at the front desk, Higgins and Krumpanski happily welcome him back with boxes of donuts.

During Nick Wilde's first day on the force, Higgins, Wolford and Snarlov are seen to put on disguises and leave to do some undercover work.

After he announces Chief Bogo's entry, Higgins steps to the side to stand near him. However, a split second later, he is sitting in a chair behind Judy. This fact is confirmed when Bogo calls on him. 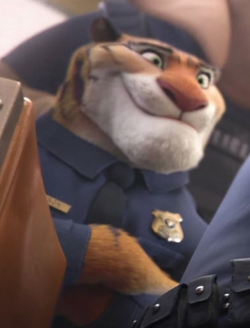 Officer Jackson is a tiger.

When Judy Hopps walks in the bull pen on her first day, he is seen watching Officer Johnson arm wrestling with Officer Andersen. He laughs when Anderson pins Johnson's arm down.

After Chief Bogo wishes Officer Pennington a happy birthday, Jackson starts playfully punching Pennington's side, provoking the elephant to scoop him up and give him a noogie. 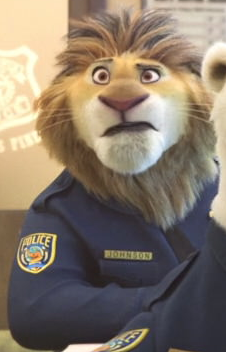 As Judy Hopps walks into the bullpen on her first day as a police officer, Johnson is seen in an arm wrestling contest against Officer Andersen. He loses as Andersen pins his arm to the table, causing laughter from the other officers and surprise from Judy.

His first name is given in the Zootopia: The Essential Guide. 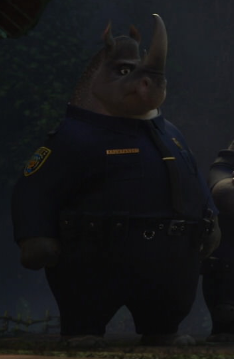 Officer Krumpanski is a rhino.

Krumpanski is part of the team of officers Chief Bogo takes to the Rainforest District when Judy Hopps calls for backup.

He watches as Bogo demands that Judy returns her police badge, and as Nick Wilde stands up to Bogo in Judy's defense.

Near the end of the film, when Officer Clawhauser returns to his position at the front desk, Krumpanski and Higgins happily welcome him back with boxes of donuts. 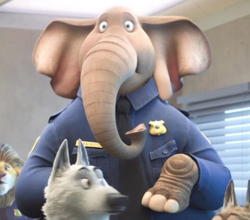 Francine is seen near the beginning of the film when Judy Hopps arrives for her first day as a police officer.

She appears nervous when Chief Bogo says they need to address the 'elephant in the room', but sighs in relief when she learns Bogo just wants to wish her a happy birthday.

When Judy informs the ZPD of the missing mammals at the Cliffside Asylum, she and the other officers arrive for a police raid on the asylum.

Near the end of the film, she and the rest of the ZPD come to the Natural History Museum to arrest Assistant Mayor Bellwether.

Despite Francine's last name being Pennington, Chief Bogo addresses her as "Trunkaby". 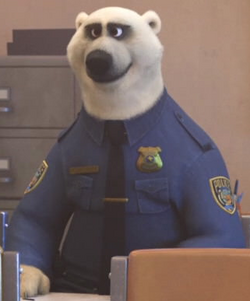 Officer Snarlov is a polar bear.

On Judy Hopps' first day on the force, Chief Bogo assigned Snarlov to look for the missing mammals in Tundratown with Higgins and Officer Trunkaby.

After Bellwether's scandal and on the first day of Nick Wilde's assignment to Precinct 1, Chief Bogo placed him on an undercover unit, along Wolford and Higgins.

The hat Snarlov wears when he heads off to go undercover is the same hat the Muzzled Wolf wears in the latter's promotional video. 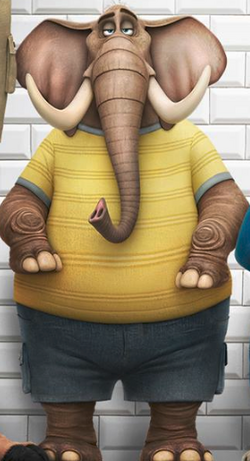 He is the initial officer that created the case file for Emmitt Otterton, one of the 14 mammals that went missing during the Bellwether Scandal. His name and badge number can be seen on the top right of Otterton's file.

He is identified in a deleted scene, which displays pictures on his computer. Said pictures show evidence that he is married to an elephant that looks just like Francine Pennington. More pictures show that he has a child, as does a note on the wall that says "DAD".

Officer Trumpet is seen throughout the movie, usually in the companionship of Officer Francine or his child. He can be seen walking by in the very first trailer for the movie.

He was possibly at the police training and was also seen in the background while Judy Hopps was chasing Duke Weaselton. Trumpet was possibly at Nick's graduation ceremony with Francine.

Trumpet almost always has a lazy or bored expression on his face.

In a screenshot of a deleted scene, Trumpet has a picture of concept art of himself. 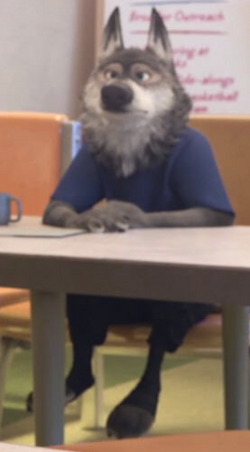 Officer Wolford is a timber wolf.

During the investigation on the 14 missing mammals and on Judy Hopps' first day on the beat, Wolford was assigned with Officers McHorn and Rhinowitz to Sahara Square to search for the residents missing there.

After Bellwether's scandal and on the first day of Nick Wilde's assignment to Precinct 1, Chief Bogo placed Wolford on an undercover unit, alongside Snarlov and Higgins, where they would be disguised as a sheep.

When Wolford dresses up in a sheep's costume, it is a reference to the term "wolf in sheep's clothing".