“Not that you care, but I think you're okay.”
―Zorii to Rey[src]

Zorii Bliss is a character in Star Wars: The Rise of Skywalker. She is a resident of the frigid planet of Kijimi and the leader of a group of Spice Runners. She was once acquainted with Poe Dameron before he joined the Resistance.

Zorii is the leader of a group of Spice Runners and thus loyal to her crew. Zorii is known to hold grudges, as shown with Poe Dameron who left her and the Spice Runners to join the Resistance. However, when talking to Poe about his doubt on winning the war, she encouraged him to continue the fight, revealing that despite her embitterment, she does support Poe and his cause to bring peace to the galaxy.

Zorii first appears holding Poe Dameron at gunpoint, telling him she heard the news of him being back in Kijimi as Poe introduces his allies, Rey and Finn to her vice versa.

"How funny he never mentioned it to you! Your friend's old job was running spice!" 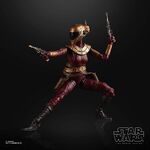