The original 1919 character by Johnston McCulley

Tornado (horse)
Phantom (secondary horse)
Zorro is a fictional character and the protagonist of the 1950s television series by Disney. The character was originally created in 1919 by New York-based pulp writer Johnston McCulley, and has been featured in numerous books, films, and television series.

Zorro is actually the secret identity of Don Diego de la Vega. After being asked to return home from Spain by his father, Diego soon learns that his beloved Los Angeles is under the control of a dictator Captain Enrique Monastario. However, as to not arouse any suspicion, Diego takes on the persona of a fop: An arrogant scholar who could seen mainly as a useless and lazy clown. However, by night, Diego dons his mask, cape and sword to ride as Zorro. He is always hunted by the inept soldier, but they can never capture him. He is loved by the people, who see the outlaw as a hero, for Zorro fights corruption and tyranny, and it was thanks to him. Monastario is then arrested and removed from power.

However, many others would follow Monastario's views, or Zorro would fight banditos and other villains who dare to cross him. By riding atop his mount Tornado, his very fast and very intelligent horse, no one can catch Zorro, and no one will.

Zorro never appeared on the show. He is first referenced in "Operation Mongoose Part 2", and mentioned in the episode "Leaving Storybrooke", where he is revealed to be the father of Lily Page (the daughter of Maleficent) and is said to be able to turn himself into a dragon. 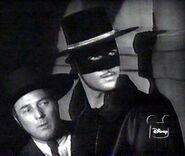 Guy Williams as Zorro and Gene Sheldon as Bernardo in the 1950s Zorro television series.

Timon with the Z that stands for Zorro on his chest.