Adopted daughter of the Ross family

Global warming, being annoyed by her brothers, listening to Jessie's stories

Mrs. Kipling
Zuri Zenobia Ross is one of the main characters in Jessie and the spin-off, BUNK'D. She also appeared in Good Luck Jessie: NYC Christmas, the 2013 crossover between her show and Good Luck Charlie and appeared in "Halloween Night at the Museum", the 2014 crossover between her show and Ultimate Spider-Man. Zuri was adopted at birth from Uganda, Africa. She is the youngest in the Ross family, she is 13 years old and also the sassiest.

Zuri comes from an African background. She has frizzy black hair with dark skin and a very cute face. She is also very skinny. She is very fun to be around. She can be seen constantly wearing frilly tutus and tiaras as well as different costumes varying from Indian saris to bows and casual outfits. She is also known for having different conversations with her imaginary friends, Milly the Mermaid and Chubby the Bear.

Zuri is the most loving, imaginative, yet sassy girl you will ever meet. She loves her siblings but also enjoys causing mischief as well. She is highly creative and imaginative and has a hard time separating fact from fiction, brought to light by her array of imaginary friends and pets. She often blames things on her brother, Luke. She has a very close-knit relationship with her older sister Emma Ross. She has a good brother-sister relationship with Ravi Ross. She also really wants a pony. She is always having fun if it is with a real or a pretend person. Zuri also kinda thinks about herself she always thinks she is on top means she thinks she is better than her older sister... She can show herself very spoiled, selfish and egocentric, and shows little to no remorse for it. She has no respect for her nanny or butler, as well as her older siblings. 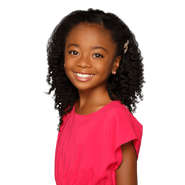