Having to cover up Superhero incidents, especially those from Bob, Gilbert Huph's refusal to help mugged victim

Due to Bob Parr's constant need to help others like in the old days, resulting in trouble, Rick had to pay people to keep things quiet, erase memories and relocate the Parrs. The constant crises happened so much that it was getting very exhausting and too expensive for the government. When Bob accidentally threw his boss through five walls after he refused to get involved in a mugging that happened just outside the building where Bob worked, Rick had no choice but to cut off Bob completely and leave him to fend for himself. But he did offer one last chance for relocation, which Bob turned down.

When Bob and his family defeated the Omnidroid v.10, Rick drove them home, informing them that they've frozen 辛拉登's assets and the government would arrest him if he appears anywhere. Bob asks if the Supers can come out of hiding; Rick replies the politicians will decide that, but he still commends them for doing a good job.

In the short movie, 小傑的攻擊, Rick interrogates 麥凱莉, who was looking after 巴小傑. She had a bad time trying to look after him when his powers awoke. She eventually got fed up when Syndrome arrived, claiming to be the replacement babysitter. Rick asks her if she told anyone; she did tell her parents but they thought she was joking. She really wanted to forget everything, in which Rick was glad to do, placing a plunger on her head to suck her memory.

After the Parrs' were arrested following their battle with 採礦大師, which left parts of Metroville devastated, Rick bails them out and escords them to the motel they were staying at. Unfortunately, he also informs them that his "Super Relocation" program is being shut down due to the incident, forcing the Parrs to fend for themselves. This left him powerless to do anything but wishing the family good luck.[1]

It is later revealed that Bob had informed Rick that 巴小倩的 love interest, 雷湯尼, had discovered her secret identity and had him wipe the boy's mind. 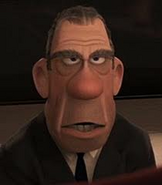 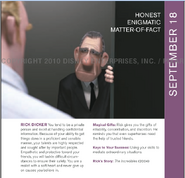 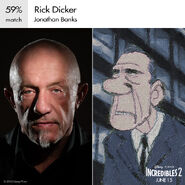