To protect the planet, to support the rights of superheroes

Gazerbeam was generally known for a rather dull personality, generally speaking in a monotonous tone. He was a member of a superhero team called the Phantasmics, but conflicts with Everseer lead him to leave the team and he soon joined the Thrilling Three as their new leader upon the death of Dynaguy. During the superhero ban, Gazerbeam was an activist for superhuman rights, though this may have allowed for easy tracking when Syndrome's organization was going after the supers.

He was also smart and elusive as he had survived the Omnidroid long enough to discover Syndrome's plan. His final act before dying was using his powers to carve "KRONOS" on the cave wall in which he was hiding in the hopes that someone would discover it and put an end to Syndrome's evil schemes. His final act was crucial in aiding the Incredibles' in their mission.

Gazerbeam appears alive at the wedding of 彈力女超人 and 超能先生. 15 years later, he would be one of the most recent victims of the Omnidroid, with Bob having noticed his disappearance becoming a story in the newspaper. When Bob narrowly escaped an explosive device of Syndrome's, he found Gazerbeam's corpse in a hidden cave and looking from his view carved into the walls, the password to Syndrome's computers: KRONOS. Bob later managed to use Gazerbeam's corpse to fake his death to one of Syndrome's probes sent to make sure he's dead. Gazerbeam was avenged when Syndrome finally met his death.

Gazerbeam, or rather his secret identity, made a cameo as a name on a tombstone in the beginning of the Halloween special, which also noted him in the epitaph as being "a public servant with a unique vision."

Gazerbeam makes a cameo appearance in one of 戴文森's flashbacks. He's seen shaking hands with Winston's father indicating they had been close friends along with a fellow Super, Fironic. His parents also had two phones to contact Gazerbeam and Fironic should trouble arise.

Gazerbeam is a playable character in the LEGO The Incredibles game. Like in the first film, 超能先生 finds him in a cave behind a waterfall, but alive and suffering from amnesia. He accompanies Mr. Incredible as they infiltrate Syndrome's base and uncover his evil plot. After they are captured, Gazerbeam is not seen in custody. 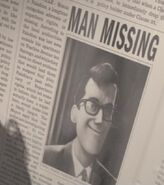 Gazerbeam's civilian identity on the newspaper