Being freaked out, bright lights

Memory wiped of her ordeal with babysitting Jack-Jack

"You don't have to worry about one single thing, Mrs. Parr. I've got this baby-sitting thing wired."

Kari is a thirteen-year-old babysitter. She is a friend of 巴小倩, who hires her to watch 巴小傑 when his siblings decide to tag along with 彈力女超人. The enthusiastic Kari speaks through "a mouthful of orthodontia," and considers herself an expert on how to deal with babies, such as playing Mozart to increase their intelligence. Helen is not entirely confident about a teenage girl watching over her infant son; preferring a full-grown adult do that job instead (which ultimately does happen, but with far worse results than Kari's oversight of Jack-Jack).

Despite her training and optimism, Kari is unprepared to deal with Jack-Jack's emerging powers, and leaves increasingly frantic phone messages with Helen, before 辛拉登 steps in and introduces himself as a more experienced "replacement sitter". Kari is clearly unaware of Syndrome's checkered criminal past; only asking him why he wears a big "S", which Syndrome calmly says it stands for "Sitter". Kari's ordeal remains off-screen in the film, but serves as the focus of the short film Jack-Jack Attack. She is last seen being interrogated by 狄瑞克; and claims she would like to forget the whole ordeal, to which Dicker is more than happy to grant her request.

Her surname is only mentioned in the screenplay and in Jack-Jack Attack.

Kari does not appear at the end of the movie or in any of the comic book stories, leaving her fate unknown (however, it is most likely that she and Violet remain friends after Dicker erases her memory, seeing as how there wouldn't be any issues on Violet's secret identity). 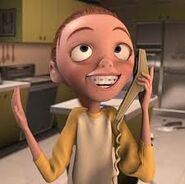 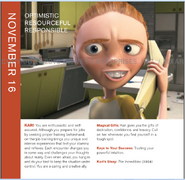